What is a Center Square and how to use it

Center square is a simple tool used to find out the center of any circular object, as we know that the center of a circle can be found by intersecting any two of its diameters, Center squares are used to achieve this objective, Let us discuss the right method of working with a center square the model in our considerations is a simple one, readily available, with having a main rule and a pivoted triangular rule.

The circular object whose center is to be found is placed aligned to the open face of triangular rule, and a line is drawn on open face of circular object being measured with the help of main rule this is the first diameter , now the scale is aligned in such a way that the main rule becomes parallel to the existing drawn diameter and circular object is held under triangular scale , another line is drawn at this position , this is the second diameter , the point at which both of these drawn lines means the diameters intersect is actually the center point of this circular object which is being measured as mentioned above that the point where two diameters of a circle intersect is called its center point or origin.

Center squares are widely used in furniture industry, more precise and well made center squares are used in other fields as well, like in engineering work shops they have got a wide applications, main rule graduations can be selected as per desire for example such tools can be acquired with graduations in inches , millimeters and centimeters as well , while working out for finding center of an object we also achieve its diameter , which is also an important parameter being used significantly for design purpose for example in designing of gears etc. 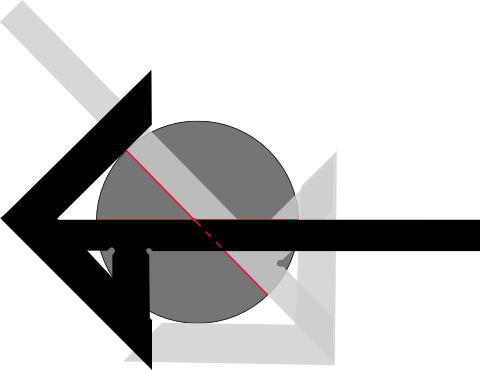 The black part of this image is demonstrating first part of center determination while gray part is portraying the second part, red lines are diameters which were acquired with the help of tool and the point of these two red line intersections is actually the center.